Raleigh is the capital of the state of North Carolina and the seat of Wake County in the United States. Raleigh is known as the “City of Oaks” for its many oak trees, which line the streets in the heart of the city. The city covers a land area of 147.6 square miles (382 km2). The U.S. Census Bureau estimated the city’s population as 474,069 as of July 1, 2019. It is one of the fastest-growing cities in the country

Here are 15 things you should expect to love about your move to Raleigh!

1. Community – A Great Reason to Move to Raleigh

One of the best parts about Raleigh is that it’s a city with a small-town feel. Raleigh is a city where people know your face and that’s all they need to know. It’s often you will run into someone you met, recognize their face and embrace in a warm greeting without even knowing one another’s names. There is a feeling of comfortability and familiarity in Raleigh that comes from that small-town feel. You may not recognize it at first, give it six months though and you’ll know exactly what I’m talking about.

The population in Raleigh, NC has seen an increase from 290,000 people in the year 2000 to nearly 500,000 folks here in 2019. This growth in population makes Raleigh one of the fastest-growing cities in the United States.

Relocating to Raleigh NC, Great City to Move to!

Part of what makes the community so great in Raleigh are the people who call the city home. Living in Raleigh you will encounter some of the nicest, most welcoming people in the world. The happiness of the people who live in Raleigh is a product of everything Raleigh has to offer including the number one place for jobs, awesome weather, and affordability, unlike most other cities. Apex, NC, a suburb of Raleigh, was most recently ranked as the #1 Best Place to Live in the United States by Money Magazine.

If you’re moving to Raleigh from the northern states (NY, MA, CT, NJ are popular states to move from) you’re sure to notice right away just how welcoming the people in Raleigh are. After I made the move from Boston I realized right away that the personality of the city is contagious. You’ll find yourself a happier person because you’re surrounded by people who are happy. If you have a dog, there are dog parks everywhere in Raleigh!


If you’re moving to Raleigh you will have a much easier time finding a job than you will anywhere else. Glassdoor ranked the city of Raleigh, NC as the #1 Best City for Jobs in 2015!

The Raleigh airport, also known as Raleigh Durham International Airport (RDU) has seen some major renovations in recent years as well as new airlines bringing new flight paths in and out of the Raleigh area.

With more than 24,000 job openings there is sure to be one for you, and the median base salary to median home value is some of the best in the country! Additionally, Raleigh has a job satisfaction rating of 3.3 Raleigh, NC is on the top end when it comes to being happy in the work-place.

The Research Triangle Park (RTP) is a huge part of what makes Raleigh such a great place for jobs. A lot of executives will move to Raleigh to begin working in RTP with so many larger businesses that have their office headquarters there. Outside of RTP, you will find companies like MetLife who just moved to Cary, NC and set up their technology office with six-figure salaries. Go to Downtown Raleigh and you will see other companies like RedHat and Citrix who have set their headquarters there. 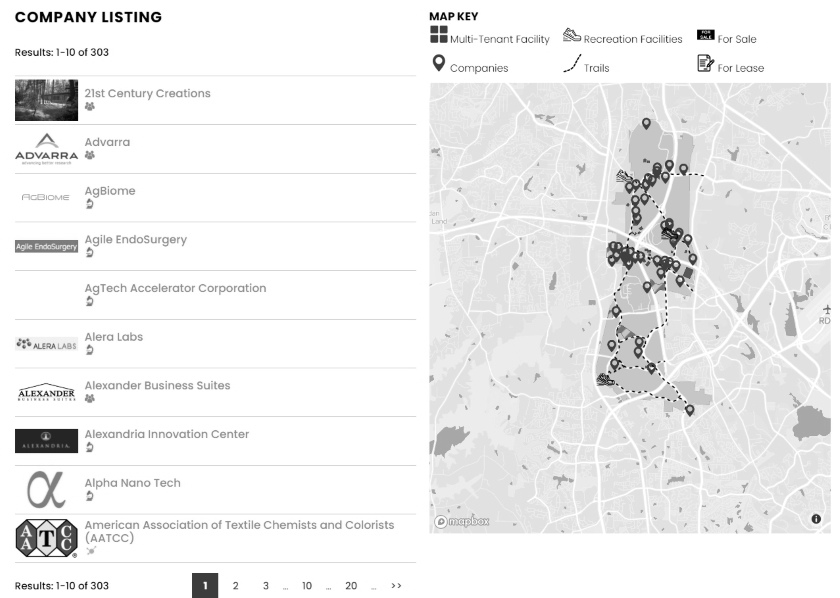 3. The Food in Raleigh is Top-Notch

With over 1,200 Restaurants in the Raleigh area, you will always find something new to try. What separates Raleigh from a lot of the restaurants from other places around the world is the service, it’s more than just fine dining, it’s an experience you’ll have to try for yourself! Searching for food outside of Downtown Raleigh?

4. Affordability of Homes for Sale in Raleigh

In Raleigh, the homes for sale are some of the most affordable in the nation. Whether you’re searching for a house in Downtown Raleigh, North Raleigh, or in a suburb of Raleigh you’ll find the homes are priced fairly for the quality of life and economy. Raleigh Real Estate offers great value.

One of the biggest reasons people move to the Raleigh area is thanks to how affordable the city is. It’s the only major technology city with home prices under the national average. If you are in the tech industry your cost of living in Raleigh will be significantly less than it will be in other major tech cities like San Francisco, California or even Austin, Texas. People often compare Austin’s growth similarities to the growth Raleigh is currently experiencing. It’s a great time to be living in Raleigh!

Whether you’re shopping for homes in Cary, Apex, Holly Springs or in north Raleigh you’ll have easy access to the city, at an affordable price. A lot of Cary is people who have moved from the northeast. Those people who moved to Raleigh from New York and New England sure are happy about the weather.

5. Weather in Raleigh is a Reason to Move!

The weather in Raleigh, in my opinion, is perfect and a great reason to relocate. We celebrate all four seasons (yes, it snows here!) and we are only a couple hours from the Mountains if you enjoy skiing or snowboarding. Here is a great image to give you an idea of what to expect from month to month weather trends for Raleigh.

6. Education in Raleigh is Some of Best in Nation

Raleigh is ranked as the second most educated city in America by Forbes, and it’s neighbor Durham is third. With universities like North Carolina State University, Meredith College, Peace University, Duke University, and the University of North Carolina all within a short distance of Raleigh, it only makes sense that the area places a high priority on the quality of education.

GreatSchools.Org is a great resource if you want to look up the ratings of schools in the Raleigh area. In 2010 GreatSchools ranked Raleigh as the #1 City for schools in the United States. The accolades continue to pile up for Raleigh!

For those with a great appreciation of art, it’s just one more reason to relocate to Raleigh!

8. Raleigh NC is THE Spot for Live Music!

If you love music, Raleigh is a great place to relocate. There are several live concerts a week going on in Raleigh whether your band is playing at the RedHat or Walnut Creek Amphitheater.

Live Music in Raleigh NC a Great Reason to Relocate if you love concernts!

For the not so often days and nights when there isn’t a concert, there is always live music somewhere in Raleigh.

If you’re planning on relocating to the Raleigh area, you are sure to find some great night time entertainment. Raleigh has put a focus on its entertainment, especially in the past decade where they have revamped Fayetteville District, Moore Square, Glenwood South and other areas around the city’s core.

The Carolina Hurricanes are the only professional sports team in Raleigh. NC State, UNC-Chapel Hill, and Duke have some awesome fan bases and tailgating.

College sports are big in Raleigh, particularly college basketball. Anyone who follows college sports knows about the tobacco road rivalry between The Duke Blue Devils and The University of North Carolina Tar Heels. Two of the top college basketball teams year in and year out both located just minutes from the city of Raleigh. If you love college sports it’s a great reason to relocate to the Raleigh area.

Additionally, there are top Triple-A baseball teams like the Durham Bulls and the Holly Springs Salamanders. If you enjoy going to the ball game, you’ll fall in love with the local baseball teams.

How far is Raleigh NC from the beach? A short two-hour drive and your feet are in the sand.

Wrightsville Beach, Carolina Beach, and The Outer Banks are some of the favorite spots of local Raleighites to visit when the weather is nice. It makes for a great day trip or weekend getaway for those beach lovers looking for an additional reason to relocate. 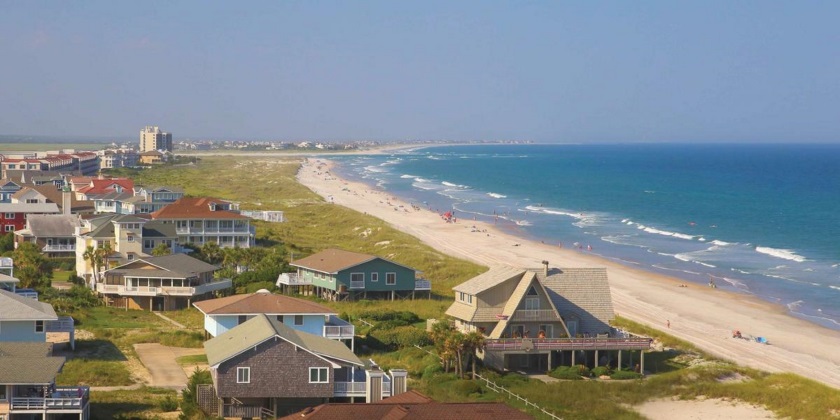 Skiing and Snowboarding is something you will find a short couple of hours from the city of Raleigh. Sugar, Ski Beech, Winterplace, and Snowshoe are all great mountains to go hit the slopes!

If you love golf, you’re going to love Raleigh, NC! A short hour drive south is Pinehurst, North Carolina a city known as the “Home of Golf in the U.S.” The North Carolina Golf Panel ranks the top 100 courses found in NC and the Pinehurst area has three of the top five golf courses on the list.

It’s hard to go for a 10-minute drive in Pinehurst without passing at least one golf course. The density of golf courses in the area is the reason for the nickname “The Sandhills.”

The number of golf course communities in the Raleigh area is huge. It’s not hard to understand why the people in Raleigh love their golf with courses like Lonnie Poole to the right. Golf is a large part of North Carolina’s history and the year round nice weather keeps the courses open longer.

People travel from all over the world to visit the golf courses in the Raleigh and Pinehurst area. Golf is a great reason to relocate to the Raleigh area, you’ll always have an opportunity to play no matter the season! 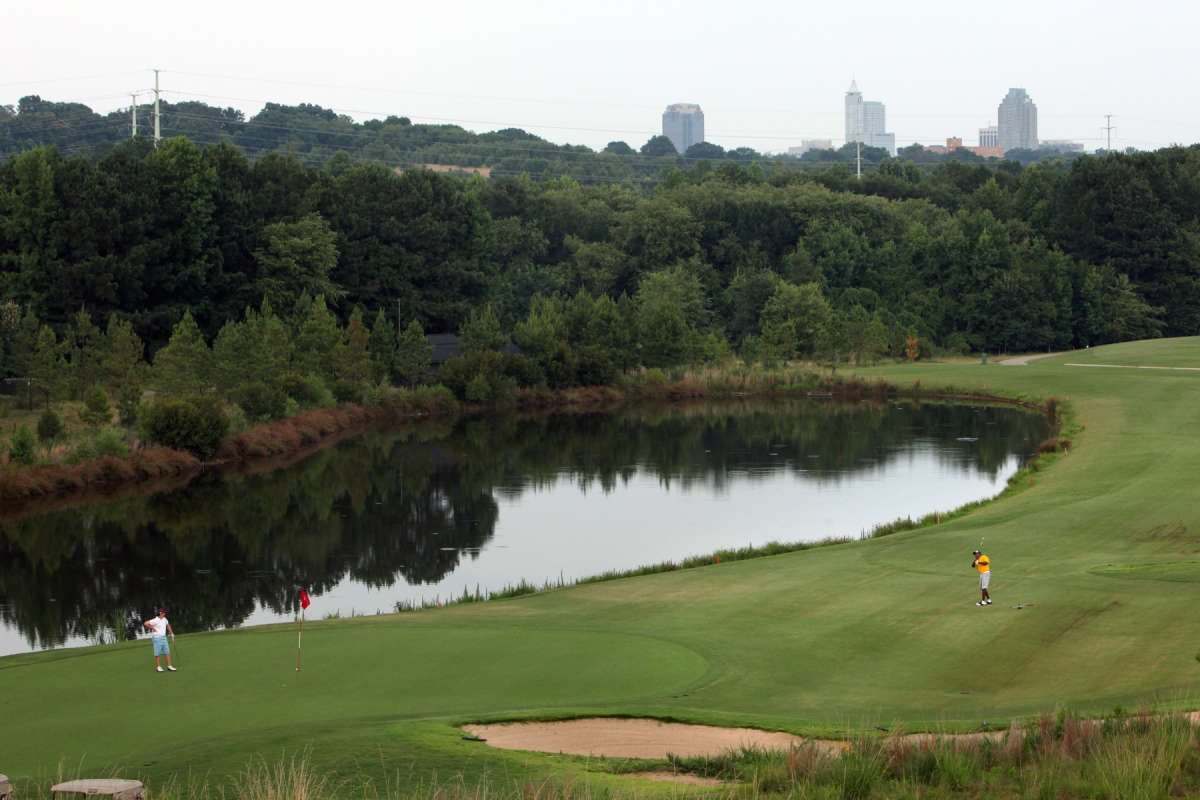 If you’re thinking of moving to the Raleigh, NC area, brace yourself. You are going to really enjoy living in Raleigh!

15. What are the pros and cons of moving to North Carolina?.

There are both pros and cons to moving to Raleigh. For each individual situation, the pros and cons are going to be a bit different which makes it important to evaluate such a big decision and writing everything down. Some of the pros of moving to Raleigh can be found in this article and for most people, those will be the reasons they make the move.

The pros to living in Raleigh if someone is moving from a city like Chicago are obvious. The weather, the affordability, a lot less traffic and a great economic opportunity for entrepreneurs and small businesses. A lot of folks are making the move from cities like Chicago, New York, Boston, even California thanks to the affordability of Raleigh.

The cons to moving to Raleigh are likely obvious to you as well. Some of the common cons would be leaving family, friends and memories behind. After moving to Raleigh five years ago those are the biggest cons I experienced, personally. Other than that, there isn’t much I miss about moving from Boston (except maybe the Boston sports teams). Raleigh is a great place and the pros outweighed the cons for me! 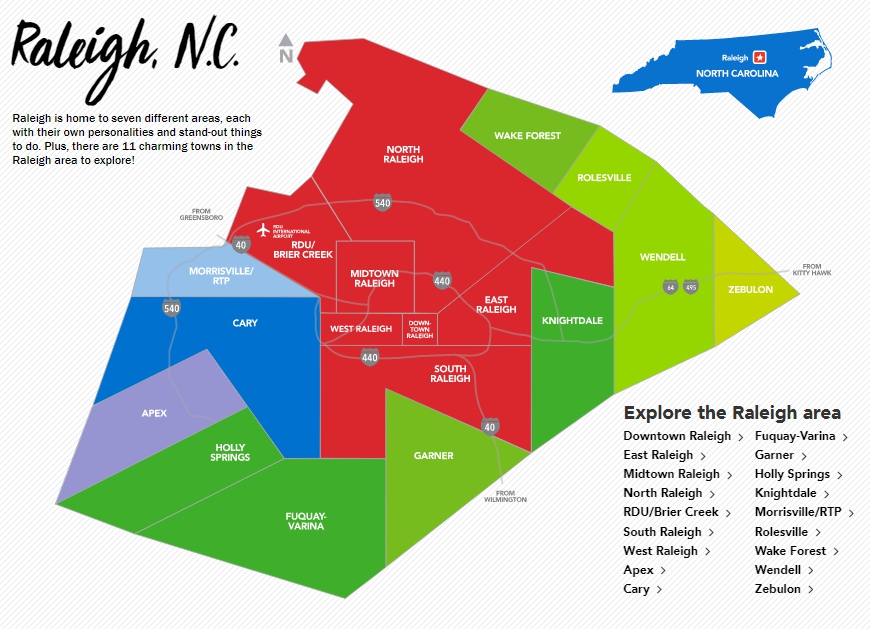